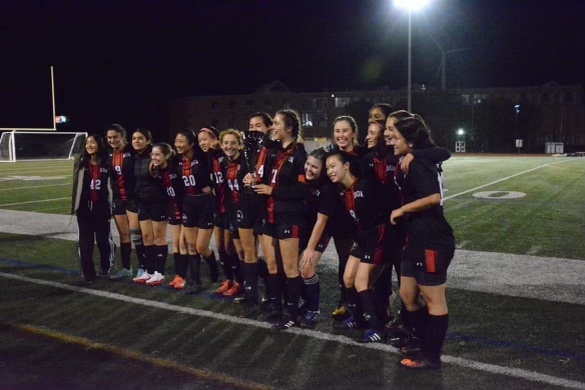 Congratulations to the BUA Girls Soccer team, whose 2-0 victory over the International School of Boston in last night’s game earned them the title of Girls Independent League champions!

Co-captain Casssandra Swartz ’22 sends in this recap of the championship game:

“On November 5, the BUA Girls Soccer team departed to face off against International School of Boston (ISB) at Hormel Stadium for the Girls Independent League Championships. We played ISB for our first game of the season, and suffered a 0-2 loss. We were determined to redeem ourselves and secure the title of champions. The game began as an even battle, the ball shifting back and forth between both sides of the field. Time was running out in the half, and the score was still 0-0. Luckily, we gained an opportunity through a free kick right outside of the penalty area. Susanna Boberg ’23 capitalized on this, and shot past their wall of defenders into the upper right hand area of the net, past the goalie’s arms. We were all ecstatic, and our newfound energy put us into momentum to maintain our lead and get another goal. While ISB played hard, our team played harder, doing everything we could to get another opportunity to score. This opportunity came when Alex Furman ’25, with a great cross from the right corner, delivered the ball into the box where Jackson Phelps ’23 connected with a beautiful header and sent the ball into the goal. With a score now of 2-0, our defense stayed strong until the very last minute to secure our victory. The whistle blew, and we all sprinted to each other in celebration, knowing that we had become the champions of the Girls Independent League, this year being only the second year that the girls soccer team has played in a league. It was an amazing night, and the best way to end such a great season.

The girls on our team have fought hard to earn our spot in the playoffs, and this was one of the best games we have played all season. Special thanks to all of our coaches — Annie McConnon, Emma Moneuse, Gabby Glass, and Abi Ewen — who were incredibly supportive and all guided us to victory this season. Those of us who are returning next year look forward to the next season, where we can pick up right from where we left off.”

BUA Welcomes Robert O’Rourke as Next Director of College Counseling